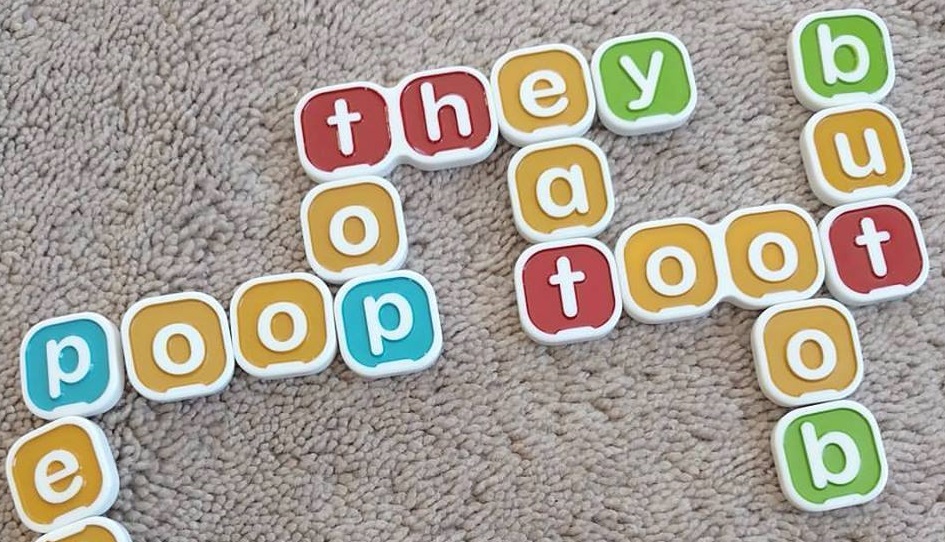 One of my Facebook friend’s posted this pic from her kids’ Bananagrams game a couple months ago. So great, right?

I mean, “penis-poop-they-eat-toot-but” simply can’t be beat. The best part was that the mom was most upset that they spelled “butt” wrong. Cause they really did mean “butt,” and not “but,” and she knew it.

I got all fired up to write about kids using bad words being pretty normal, why they do it, and how to respond. But before I got a chance, my lovely colleague and fellow parent coach, Nicole Schwartz over at Imperfect Families wrote a super-comprehensive post about it so click here to head on over to her site, cause she seriously nailed it: Kids are kids, don’t fuel the fire, there are many good ways to address this behavior–YAY!

Here are the only other things I want to say about potty talk, bad words, and swearing (yes, even the F-bomb):

CONFESSION TIME: We allow full on swearing in our home. From the 8-year-old. Yes, even that word. And that one. And that one too.

Truth be told, the first time my son said f*** he wasn’t even 2, and he was parroting me. 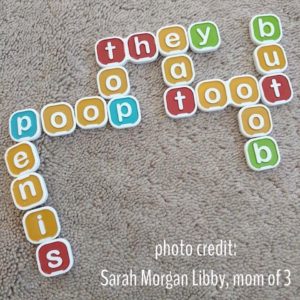 I attempted to clean up my act, but honestly, I love to swear. I find it to be fabulous stress relief, and unless you are swearing AT someone, or they’ve specifically requested that you not, I don’t really see the harm.

Once our boy entered preschool, we revisited the subject (relapsed) and decided to teach him another important concept:

SITUATIONAL AWARENESS: I’m borrowing this term from whatever it really means (something to do with law enforcement, and maybe Jason Bourne?) and applying it for my own purposes. Here’s what I told my 4-year-old when he got to repeating my curse words at home,

“Bub, those are strong words. They are powerful words because our culture says so. It’s important for you to know that MOST grown-ups will be VERY upset if you ever say that in front of them.” He looked me dead in the eye and asked,

“But not you Mommy?”

So in the same way that my child learned that his teachers would never cave to whining but I sometimes would, he learned that he could swear at home, but not at school. It has never, not once, been a problem. If I can let my language-behavior-actual hair down at home, why can’t he?  Which leads me to…

THE DOUBLE STANDARD: If you step back and think about it, kids have it tough all over. They are expected to hold it together and be on their best behavior at home, at school, in the grocery store, on the street, at Grandma’s house, whilst attending a classmate’s birthday party–pretty much EVERYWHERE.

This is just plain unfair.

Listen, I get it; we want our children to grow up into competent, socially aware, generally polite humans. But here’s my 2-progned 2 cents:

1. Our kids need a break. They deserve some time/space when we loosen our standards; stop focusing on their “behavior,” give them room to breathe, and for the love of Pete, let them be in a cranky mood for once without getting completely annoyed with them. Imagine if your partner or friends ALWAYS expected you to be chipper and cooperative. Just. Not. Realistic. We all have varying public/private personas and behavior–it’s OK for kids to, too.

2. If our expectations are too high/unreasonable, they are going to blow a gasket at some point. YOU DON’T WANT THAT TO BE AT SCHOOL, IN THE GROCERY STORE, ON THE STREET, AT GRANDMA’S HOUSE, OR WHILST ATTENDING A CLASSMATE’S BIRTHDAY PARTY! Because of this, my philosophy is to make allkindsa space AT HOME for this type of nonsense, with teaching and coaching so that the previously mentioned situational awareness can be achieved. I actually want my child to ask himself, “Is this sleepover a good place to make a fart joke?” and answer, “Maybe not.”

So take a deep breath when your little one says “poop,” or “stupid,” or worse. I’m pretty sure you’re in good company, and if you permit space for a little “bad behavior” at home, maybe your kids won’t have quite so many meltdowns at the grocery store or at your mother-in-laws house!

Sarah MacLaughlin is author of the award-winning book, What Not to Say: Tools for Talking with Young Children and has been featured in The Huffington Post. She brings over 20 years of experience working with children and families to her coaching practice. Sarah is also mom to an eight-year-old who gives her plenty of opportunities to take her own advice. She works with families one on one, in groups, and through online offerings.