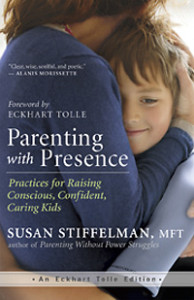 I’m honored and delighted to share this guest post excerpt from Parenting with Presence, by Susan Stiffleman with you. Susan’s voice and message are clear in this must-have book. I found myself reading things in her new book that I teach and say all the time! This book holds wise advice and you will find a signed copy of it in my Ultimate Parenting Library Giveaway that starts tomorrow–stay tuned for details.

Parents often bring their children to me because of their problems with anger. Sometimes the child has a difficult time managing his outbursts because his capacity to manage big feelings is underdeveloped because of immaturity or impulsive tendencies. But often I discover that Mom or Dad also have big tempers.

All of us — children and adults alike — are subject to strong emotions that we cannot always control. Some people are easygoing, hardly ruffled when life doesn’t go their way. But others struggle to keep frustration and disappointment from wreaking emotional havoc. If the root cause of anger is not addressed, we sometimes end up doing or saying things we regret. Using threats or punishments to deter our children from acting out angrily can drive unresolved emotions underground, where they can show up as eating disorders, addiction, or depression. It can also stockpile the fuel for a bigger explosion of rage later on.

Instead of shaming ourselves when we lose our cool, we need to step back, determine what we’re thinking or feeling, and identify the underlying source of our rage. Anger can be the outward manifestation of unresolved grief, sadness, frustration, stress, hormonal imbalance, anxiety, or fatigue. Until we understand that it is a symptom of something that needs to be addressed rather than a voluntary behavior, we will not be able to diminish its impact on our lives.

When I am working with a family in which angry outbursts are commonplace, I find it helpful to facilitate conversations between the yeller and the yellee (the target of the rage) in a way that makes it safe for both to be heard. When both parties can lay down their defenses and step into the other’s shoes for a few moments, they become more willing to work on resolving whatever emotions are fueling their flare-ups.

A young boy had a very bad temper; he often lashed out in anger at those around him. One day his father gave him a bag of nails and told him that each time he lost his temper, he was to go hammer a nail into the fence.

The first few days, the boy had to hammer lots of nails into the fence. But as time went on, he gradually found that he could catch himself before he lost his temper. Knowing that he would have to find a nail and take it to the backyard to hammer it into the fence helped him manage his angry outbursts.

Finally, the boy came to a point where he was able to tell his father that he had learned how to stop himself from losing his temper. His father said that each time he was able to get through a day without hurting others with his anger, he could remove a nail from the fence.

The day arrived when the boy went to his father to tell him that all the nails were now gone.

The father led his son to the fence and said, “You have learned something very important, son. But I want you to look at the holes in the wood. This fence will never be the same as it was before the nails were hammered into it. In the same way, when you say things in anger — even if you apologize — your words and actions leave a scar like these holes in the fence.”

We need to help our children learn to lengthen the gap between having an impulse to say or do something and acting on that impulse. To err is human and to forgive, divine. But as children deepen their understanding that, like nails in the fence, our actions have irreversible consequences and can harm important relationships, we can help them take steps toward slowing down when they are upset, taking responsibility for their actions, and making amends when needed.

The damage done by cruel words and hurtful behaviors cannot be undone. Whenever we argue with others, we need to pause and consider the effects our words might have on them.

# # #
SUSAN STIFFELMAN, MFT is the bestselling author of Parenting with Presence and Parenting without Power Struggles. She is a licensed marriage and family therapist, a credentialed teacher, and the Huffington Post’s weekly “Parent Coach” advice columnist. She lives in Malibu, California where she is an aspiring banjo player, a determined tap-dancer, and an optimistic gardener. Visit her online here and grab a copy of her new book here.