In an ongoing effort to practice what I preach, I have been test-driving theories on my own child for the past several years. For those of you who, a) have not managed to keep your home 100% screen-free, and b) are living with children old enough to beg, (toddlers are totally capable, trust me) this photo will look familiar: 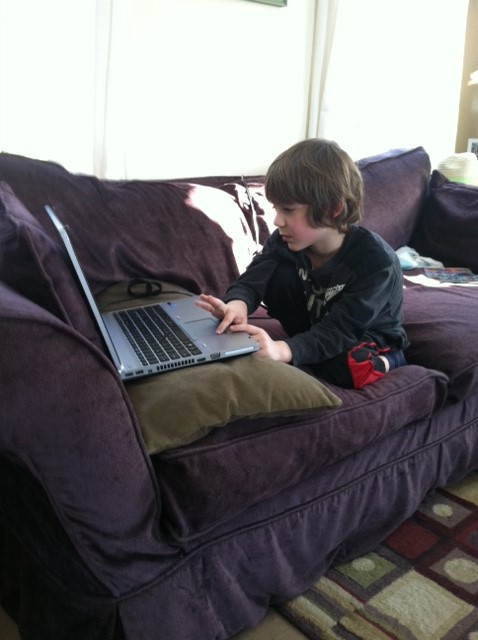 Yes, I see the sun streaming through the window, and yes, he looks like a zombie. But in my defense I was getting some work done while making dinner and we later spent an entire hour doing Legos. Plus, the point of this post isn’t to debate screen time. The point of this post is to share with you my experience of trusting my child to do what I ask without bribing, pestering, bullying or threatening him.

So the theory I’m testing is this: If children need to practice regulation skills to gain them, we can’t use the aforementioned strategies because they rely on OUR authority which is an external locus of control, not the internal one we want our kids to be growing. Instead, we have to stop pushing, and practice more patience in situations where we want young people to learn things like:

So, every once in a while, NOT EVERY DAY, but when I have time and space and feel like I’m up for a little frustration tolerance myself, I do what I did today. I say in a calm, matter-of-fact tone, “Hey, I want you to wrap up your video game now. The timer has gone off and I’m ready to do something else. I will be in the other room playing with Legos when you’d like to join me. Make it as soon as possible please.”

That’s when I snapped this photo and set the stopwatch on my phone. For the record, he didn’t even look up from the screen. I resisted the urge to reiterate, and went into the adjacent room where I proceeded to start (enticingly, I thought) playing with Legos.

And even though I’d done this before, I got nervous after about two minutes. Two minutes? I seriously can’t even wait two minutes? It’s the worry that your kid will NEVER learn to self-regulate that eats you alive in a mere two minutes. You literally imagine them NOT EVER PULLING THEMSELVES AWAY. Oh, the irony of not being able to make space for your child to learn something that they will totally learn if you just make the space for them to learn it…

(And here’s the other reality to table for another time: Since we, generally speaking, were raised within that authoritarian model, OUR locus of control is largely external. And I don’t know about you, but I kind of suck at self-regulation, frustration tolerance, and delaying gratification. Never mind giving myself space to work though any strong feelings I may have. Can you say “Work in Progress?”)

So, I just started making a little more noise in the Lego bins while talking to myself out loud about what I was going to build. Internally, I reminded myself that he could do it, that he had done it before, that he was capable, and I was giving him (and me!) the opportunity to practice a difficult skill. I incessantly checked the timer, and after 7 minutes and 54 seconds, he shut the laptop, sighed, and said, “I really wanted to keep playing that game.”

That’s when we played Legos for an hour.

P.S. The first time I waited him out, it was for a diaper change when he was around two. It took almost an hour, but figured it was a valuable lesson. And honestly, the changing pad resistance decreased after that. The first time I tried this particular trick, he was only four and it took him about a half an hour to pull himself away from the screen.

Have you experimented with occasionally allowing your child to practice self-regulation around hard-to-regulate things like screen time and sweet treats? How did it go?