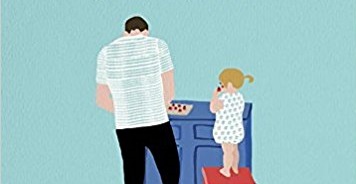 Sometimes you just want to sit back and relax and read a sweet little book about fatherhood.

Sleepless Nights and Kisses for Breakfast: Reflections on Fatherhood is the book for this! Mr. Bussola’s lyrical prose is equal parts shiny and sad.

It perfectly captures the melancholy reality of the passage of time in caring for young children—in his case three daughters. In one chapter, he remembers one of his little girls at an earlier time as “a defenseless little pile of curls.” He goes on to say,

“Being a father is brutal.

Your daughter will only be eight once and only four once and two once, and every day, every hour, every minute you find yourself watching a series of shows with no repeat performances. You, from thirty-five to forty, have new experiences, you do stuff, but essentially feel like the same person. Whereas they, between two and eight, learn to speak, read, reason, develop tastes and form independent judgments. They become.”

Ahhhh, it’s so true how they transform right before your eyes. 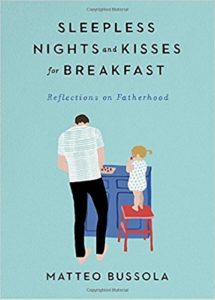 He also nails some of the emotional nuance of being a parent:

“I think about how even when we become parents, we’re terrified of disappointing our children, every day, and we live pressed like a slice of cheese between two pieces of existential bread, between one source of guilt and another. And I think how nice it would be if, rather than being pressed by guilt, we could feel sounded by beauty.”

He goes on to talk about how his mother is coming to visit and further cements the sandwich metaphor—now a parent, but still also someone’s child. Ah, the dual reality of this.

Each short chapter is like a Polaroid of familiar family life—a snapshot into the daily sights, smells, and sounds of five people who love each other well, circling their home, neighborhood, and world—together.

Sarah MacLaughlin is author of the award-winning book, What Not to Say: Tools for Talking with Young Children and has been featured in The Huffington Post. She brings over 20 years of experience working with children and families to her coaching practice. Sarah is also mom to an nine-year-old who gives her plenty of opportunities to take her own advice. She works with families one on one, in groups, and through online offerings.