The High Side of Grief {Sermon}

Grief has been up.

Honestly, it’s been up for a while. 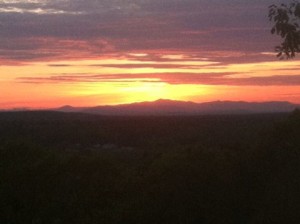 I can barely remember when it was fresh, new, and unfamiliar. When I was a child and our elderly neighbor passed away, it was mostly just confusing. We wouldn’t be going to visit and sit at her small kitchen table and eat green Jell-o anymore. When you’re 5, I suppose that’s a loss.

There were the many cats that wouldn’t stop going in the road, they never did. There were whispers overheard about so-and-so’s disease or accident. These tragedies remained mysterious and always felt far-away

Death, loss, and grief are as slippery as an eel when you’re young. Unless it gets really personal. Which I guess it did when my grandfather passed away when I was 14—but it still felt distant. When an acquaintance died in an accident when I was 19, I continued to side-step grief.

But a short time later, I arrived home after work one day and was greeted by my roommate with a terrible story about a close friend.

I went mute. For hours.

Death did not compute. It struck me as merely noise and drama—not really real. I could feel both my love, and my loss, but I could not bring them together for that alchemical transformation that only grief can offer. It took a while. It was circular and strange. We’re all familiar with Ms. Ross’ famous stages at this point, but they didn’t make sense at the time. I could only sort them out in hindsight:

Denial—My first few silent hours after being told. I curled on the couch (or was it the floor?) buried in a blanket. I could not wrap my mind around this hurt that had landed hard in my happy-go-lucky party-filled life.

Anger—Letters to the deceased that I scratched out in my journal. I sat in a park, alone. I’d spread out my jacket over the damp grass to sit. I cried and told him how pissed I was, how unfair it was that he was gone.

Bargaining—Wishful, magical thinking to evade the reality of life’s uncertainty—not wanting to see that scary, unpredictable things can just happen.

Depression—Holding hands with a friend and knocking on his mom’s door. The photos of where she had spread the ashes. Her weepy gratitude that we’d showed up to say “hello.”

Acceptance—The inevitable forward motion of being alive. There is no way to not move on. You can move on whole, or in pieces, but you move on.

And this was just the beginning.

This was my own first, tragic, personal loss. A few years later, I was working as a teacher and most of my colleagues were significantly older than I. It scared me how often they needed a day off to attend a funeral. It was then that I knew it would never end.

Later my friend’s parents—early and swift. My in-laws—way too young.

Holiday cards that delivered the uncheerful news of one’s passing. The phone call about the OD. Emails within the same year: the boating accident and the stillbirth, both entitled, Sad News.

One diagnosis after another.

I was at a memorial service last week—the mother of a dear friend. I am waiting for details on one for later in the month, the son of a former colleague. I’m now the age that those “older” teachers were back when I was in my 20s. The losses feel fast and frequent now. How does this happen?

You might be asking yourself at this point: “When is she going to talk about this “high side” of grief? Well, how DOES this happen? We love, we connect, we share, we talk, we let people in—so then we care, and feel pain when we lose them. This is not wrong—this is the way it’s supposed to be. The only way to truly avoid grief is to stop loving, or stop caring.

What if we are built for grief, just like we’re built for love and connection? And aren’t the two inextricably tied? I believe that if we embrace grief—or any emotion really—it will move on through. Not that it will ever “go away.” Certain losses may never lose their sting. But isn’t that sting a reminder of how much you loved? Sheryl Sandberg, who recently lost her husband, quoted Bono (of U2) in a Facebook post: “There is no end to grief . . . and there is no end to love.”

Isn’t it the irrational fear and avoidance of strong feelings that makes us uneasy, jittery, and frankly—a little nuts? If “that which does not kill you makes you stronger,” then maybe “that which you evade makes you weaker.” It’s something I often consider.

One of my personal spiritual heroes, Anne Lamott, in her brilliant book, Stitches: A Handbook on Meaning, Hope, and Repair, says:

“It is most comfortable to be invisible, to observe life from a distance, at one with our own intoxicating superior thoughts. But comfort and isolation are not where the surprises are. They are not where hope is.

Some people have a thick skin and you don’t. Your heart is really open and that is going to cause pain, but that is an appropriate response to this world.”

Can we do it? Can we keep our hearts open, even when it really, really hurts? I watch myself go into what I call “auto-avoid” mode. I have to practice bringing down my defenses and softening to these feelings that I’d much rather distance myself from. What would it take for you to not eject from your emotions? I certainly don’t have all the answers, but here are a few thoughts:

We can also pull ourselves away from our negative bias to refocus on that which brings us joy. There is always, always joy. I saw a pregnant woman at the memorial service last week. I love and miss the people who have gone, but I also love the people who are still here. The garden needed the rain. I went to a baseball game with my son’s school on Thursday. A friend called, the meal tasted good, the grass is green.

We’re still here, breathing in and out.

I went to the Facebook page for this church when I was writing this, to make sure I had the worship time correct—and the last two posts on the wall there were obituaries—so I know I’m not alone in facing grief.

I suggest you gather others close when you do face it—it’s less scary that way. No one loves grief, but the only means for avoiding it altogether is to isolate yourself from others—put up a wall that is insurmountable. The only other way to avoid losses is to be the next to go, right? If the choices are grief, isolation, or the obvious third option—death, I’ll take grief any day.