Excerpted from Chasing the Rabbit: A Dad’s Life Raising a Son on the Spectrum by Derek Volk with Dylan Volk

There are many Dylan stories that are entertaining. My company CFO, Doug Hellstrom, used to stick his head in my office when he needed a break from staring at his computer screen and just say, “Any new Dylan stories?” I usually had something to share. The winter of Dylan’s senior year of high school offered Doug almost daily mental breaks. One of the best Dylan story was what we call simply, “The Hitchhiker.”

We always had a curfew for Dylan because without one he would come home in the morning hours instead of the evening hours. In his senior year the curfew was 11:30pm. We would often lock
the doors and close the garage bays so Dylan had to ring the doorbell to get inside. This allowed us to make sure we did not fall asleep and miss him arriving home, and it prevented him walking in after curfew with a cro 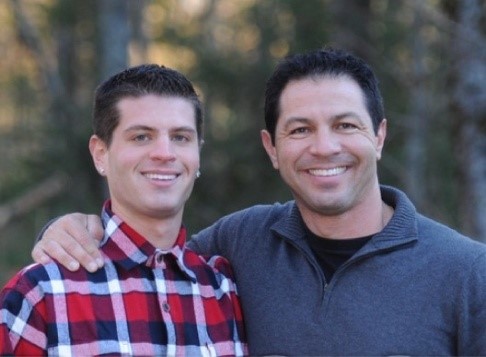 wd of people, as he was prone to do. One night during the previous summer I made the mistake of saying to Dylan, “You need to come home by curfew, I don’t care if you have ten people with you but you need to be home.” The next night when he pulled in at 11:28pm and came into the house he had about ten people with him. It was tough for me to kick them out as we both remembered my words from the night before. They were
finally all told to leave at 2:00am when they were just too loud for me to get any sleep.

On one particular cold night in early December we were just about asleep when the doorbell rang. Dylan was home just in time. It was 11:29pm. I went downstairs, in my t-shirt and underwear because that is what I sleep in, and opened the door. Dylan breezed past me heading to the living room and as he passed he said,

“I made curfew, bring her home.”

He then proceeded over to the couch and turned on the TV. I stood there, in my underwear, staring at a rather attractive 28-year-old woman I had never seen before who was wearing no shoes! She was “the hitchhiker.”

“Dylan,” I called from the mudroom, “come over here please.”

“Oh, she is a hitchhiker. I picked her up because she needed a ride to South Portland and didn’t have any shoes on. It’s cold. Give her a ride home,”

“Why didn’t you give her a ride home?”

“I needed to make curfew.”

“Dylan, making curfew means you come home and all the people that need rides are already dropped off. I am not going out at this hour and I am not taking some strange lady with no shoes home.”

Now I was in a pickle. Dylan had tricked me into staying out later than curfew by picking up a hitchhiker knowing I would not want to go out at 11:30pm to bring her home. Little did I know that standing at the stop sign at the end of our street were three or four of his other friends that needed to get rides home. It was a brilliant move.

An hour later, he returned. When I asked him why it took him an hour to bring one person to South Portland he admitted that “a couple others needed rides, too.” It was too late to do much about it other than punish him which, at 18, wasn’t going to get me very far. He had outsmarted me that night and I was actually impressed with his cleverness.

As a parent and parent educator who works mainly with neurotypical children, I was surprised at how meaningful I found this book. ANYONE who parents (and hence struggles!) will see the beauty in this story. Difficult behavior is not sugar-coated, nor is the parental frustration. This book shows the triumph of love over adversity. You can get a copy of Chasing the Rabbit right here.